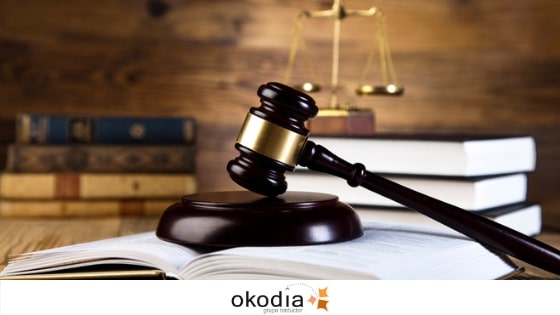 The challenges of legal translation

There are as many types of translation as fields to which texts belong. The contents of each specialisation have their own unique, exclusive connotations, which means that transcriptions must be treated in a specialised, independent way. Specific terms or idioms should be taken into account when carrying out these translations. But, what is so special about legal translations?

When you translate a website, a restaurant menu, a storybook, or any other material, you must assume the responsibility that this entails, as readers must be able to read them and understand the same meaning that the author tried to convey. This responsibility also extends to legal translations, but the connotation that makes them “different” lies in their legal nature. Basically, legal translations are translations of legal texts. Hence the consequences of a bad translation can be very serious, and even dramatic.

What type of documents are legal texts?

Well, any document of a legal nature. They can be public (official documents issued by an administration or public body) or private (wills, notarial deeds, etc.) They are drafted by a specialist – a lawyer, economist, or a similar professional, including highly technical terms that are far from everyday language. Their exact counterparts must be found – not only their literal translations, but also within the relevant context, in order correctly interpret the full text.

Due to its complexity, the best translator for a legal translation is someone who is a lawyer as well as a translator. A person who spans both professions and can provide a high-quality text. It is even better if he or she can localise the text as a native speaker of the language of origin.

A legal translation is based on the laws of the country in which the original document was written, but of course, each country has its own different legal system. There is a huge difference between the countries using common law (UK, USA, etc.) systems and other countries such as Spain and France which use the continental system. The differences between the common law and continental law legal systems dates back to Roman law and can be found not only in the types of crime but also in contracts. Specifically, contracts executed under the common law system normally have more freedom in the drafting and you can find a wider range of contract types, while contracts executed under the continental legal system normally have fixed structures that constrict the freedom for drafting the text. These legal formalities can be either time-honoured archaisms or legal terminological forms that are necessary for the contract to be recognised as such. As a result, when translating a contract written in English into French, Spanish, German or Italian, we often need to adapt the text and mould the message in the original to the legal forms of continental law.

A clear example of this is the concept of a Trust, whose legal form probably has a different weight or meaning in the target culture. They are used extensively in Anglo-Saxon culture, for different reasons and purposes, but they all have in common the role of the trustee. While this may exist in Roman law, it is normally used in different circumstances. In Roman law, a trust normally appears in wills, when the deceased bequeaths their assets to a minor, for example, and they are waiting for them to reach adulthood. Here, the trustee is responsible for managing these assets without ever having the right to own them. In Anglo-Saxon law, a trust, or trust company, has many potential uses and can even replace mortgages, so the owner of a property does not have the full right to the property until they have paid the debt agreed with the trust company, which has ownership of the property until the loan is repaid in full. As a result, it is necessary to have detailed knowledge of the types of contract found in the different systems and to know when the content needs to be adapted. In any case, the important thing is for the purpose, the cause and the parties to be clear in the translation, and for the translation of the clauses to be a true reflection of the conditions and agreements in the original contract.

Of course, in an area that is so technical, the vocabulary is going to be just as difficult. Let us share with you the main difficulties, in terms of terminology and grammar, that legal translators face in their daily work.

Commas, colons, apostrophes, accents, and other elements that help create the syntax in a sentence can wreak havoc when it comes to legal translations.

Moving the syntax or even making small changes in punctuation can change the whole meaning of a sentence. However, the problem is that much greater when you have to follow the syntax rules in two different languages.

The tone of a legal document must be maintained at all times, including in the translation. Not maintaining the tone of the document could cause complications. For example, a legal notice may not be properly complied with if the tone is not strict enough. Tone also varies between languages. For example, legal English has a very formal and impersonal tone, and generally contains complex sentences covering several topics. It also mainly uses the passive voice. When translating into a language that primarily uses the active voice, getting the tone right is a big challenge. However, the real problem is that such variations in tone could change the actual meaning of the text.

Companies and people that require a legal translation need a high-quality service that generates no doubts about the reliability of contents. This can only be achieved by contacting agencies that specialise in this kind of translation, which can also guarantee that their documents will be correctly translated and that no tiny error will lead to problems. Trusting a specialist will ensure the best translation for your intellectual property documents, contracts, insurance policies, expert reports, legal proceedings, and any other legal document.