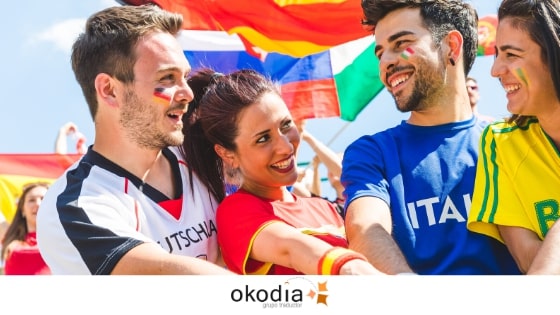 Italy, Germany and Spain, can you guess the differences between the countries?

Let’s try an experiment. What is the first word that comes to mind if I say “Italy”? And if I say “Spain”? “Germany”? You have probably just thought something along the lines of: pizza, party, and punctuality. It is useless to deny it: we are all influenced by stereotypes when we talk about other countries. While these stereotypes are generalised and often incorrect, there are differences between countries in terms of some of their characteristics.

If we think about gestures and body language in these three countries, Italy and Germany are at the two extremes, with Spain being somewhere in the middle. Imagine that an Italian friend is telling you what he did yesterday: you will probably be imagining him making gestures to illustrate what he did during the day or how he felt, making you feel almost as if you were there.

A German friend could probably tell you everything that happened while sitting at a table, slowly sipping his beer, not making too much of a song and dance out of the story.

Now, your Spanish friend would know how to involve you in the story using the intonation of his voice and accompanying his words with gestures, but without being as flamboyant as your Italian friend.

When it comes to greetings, the Italians are in the middle ground between the extreme informality of the Spanish and the extreme formality of the Germans. Italians know how to respect the proper distances when the context so requires. In these three countries, there are still some unspoken rules about how to greet people and introduce yourself, depending on how formal the situation is and the gender of the people who are meeting for the first time or greeting each other.

In Germany, when greeting people in a formal setting the normal approach is a handshake. However, in Spain, if the greeting is between a man and a woman then two kisses are allowed, even in a formal situation.

This is the typical stereotype associated with the Germans: their punctuality! This one is true. The Germans are very punctual and do not like to be kept waiting. Any lateness is seen as a lack of respect.  In Italy, however, people are much more flexible and arriving at least 15-20 minutes late is tolerated. The Spanish are even worse, being entirely capable of turning up one hour after the agreed time. There are always exceptions, of course, but this often happens.