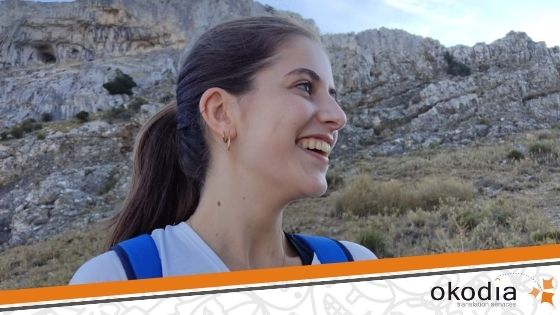 “Large companies have translation to thank for their success”

“All companies should translate their content without a second’s hesitation.” This is how Inés, one of the project managers at Okodia Translation Services, sees the world of professional translation. “They should stop to think about why big companies have got to where they are today.”They have all become international, they have tried to reach out to other societies and cultures and they have achieved this thanks to translation”, she says.

Inés studied Translation and Interpretation and since September 2021 she has been working for the translation agency Okodia. She says that she is enthusiastic about languages. So much so that in her view, without translation “the world as we know it today would not exist.” She says that if it were not for this profession “we would not have the multiculturalism we so enjoy because basically we would not understand each other”.

One thing that Inés really likes is that the constant learning process involved in the translation of documents. “If you are a curious person who wants to learn something new every day, translation is for you”, she says without hesitation.

Remember that a person does not become a professional translator just by knowing how to speak one or more languages. “People think that with a little knowledge of the language you can translate. That’s not the case. They have no idea about the training and work required to translate a simple tourism text, for example. That is before we even consider more specialised texts such as legal, technical, medical or even gastronomic ones”, she adds before reminding us that behind every translation there is always a lot of hard work.

She is currently enjoying her work immensely as every day is different. In fact, among her daily tasks are quoting for jobs, choosing the right translators for the different projects, preparing files, reviewing translations and more. “I am the intermediary between the customer and the translator, with all that that entails,” she explains.

In relation to her daily work at Okodia, she says that “there are very stressful days when you realise it is really late and you haven’t had lunch yet but there are others when there is relatively little work and you can enjoy the management side a little more”. According to Inés, each translation and each customer is different, “they are like daily mini-challenges which are fun and also allow you to learn”.

Fascinated by the evolution of Portuguese and Galician

In terms of languages, it is difficult for her to pick just one as she likes them all: “Language is a reflection of the evolution of society and culture”. However, her roots are particularly important to her and, as a good Galician, she is fascinated by “being able to compare and see the evolution of Portuguese and Galician since the two languages were originally the same, Galician-Portuguese”.

In addition to languages, Inés also loves sport. “I have played all sorts of sport from a very young age, although now I only have time for athletics. During the week, between working, training and my daily responsibilities I am left with zero free time. A couple more hours in the day would be fantastic! At the weekend I have the chance to recover and make the most of all those hours.”

She also loves to cook, visit new places and try different experiences. In short, in her daily life what she values most is “spending quality time with people close to her.”