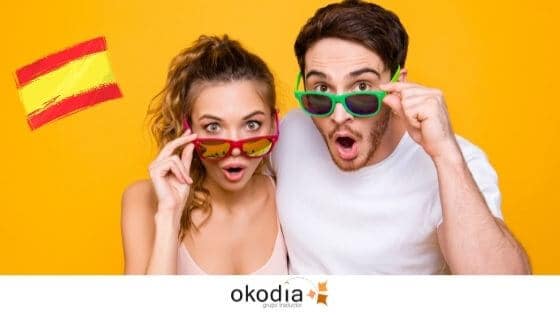 The most surprising oddities and curiosities about Spanish

What language do you keep wanting to learn every year? English? Maybe French? Or perhaps German? There is a widespread belief that these languages are essential if you want to do business internationally. That is true. However, Spanish is one of the languages with the largest number of speakers and has also become essential. How much do you know about it? Let us tell you the most surprising oddities and curiosities about Spanish

How many people speak Spanish?

Spanish is a popular language. Leaving aside Spanish-speaking countries, more and more people are choosing to learn this language. So, how many people speak Spanish around the world? The latest figures published by Statista show that Spanish is the fourth most widely spoken language on the planet.

In 2021, approximately 534 million people spoke Spanish. Of that number, 460 million are native speakers. This means that more than 6% of the world’s population is a native Spanish speaker.

The figures are in line with reports published by the Instituto Cervantes. This body estimates that if the current trend continues, the number of Spanish speakers could reach 724 million by the year 2068. Does that figure surprise you? It shouldn’t! Do you know why? In the United States alone, 8 million people learn the language each year, while in Brazil, six million people do so.

The most curious things about Spanish

Is Spanish a unique language?

Some say that Spanish is a unique language. And that is true. Its peculiarities make it special and different from other languages. But is it unique or is there more than one “Spanish” language? We are sorry to have to tell you that Spanish is not as unique as it might seem.

Many Spanish speakers communicate in their own version of Spanish which, although governed by common spelling, syntactic and grammatical rules, is different because of the richness of having its own vocabulary and in the way that certain letters and groups of letters are pronounced.

For example, in addition to pronouncing the “c” as if it were an “s” (something that is also done in southern Spain and the Canary Islands), the Spanish spoken in Latin American countries is quite different from what we could hear in, for example, a tapas bar in Salamanca.

Unique features of the language

Another characteristic that makes Spanish a unique language wherever it is spoken is its grammatical use. There are regions where the diminutive “ito” or “ita” is often used instead of “ín”. This means that the diminutive of the Spanish word for small “pequeño” is “pequeñito” instead of “pequeñín”.

In Latin American countries, second person pronoun is “vos” instead of “tú”, which is what is used in Spain. For example: ¿Vos estás jugando conmigo? (Are you coming out to play?). The same is true with the use of the pronoun “ustedes” for everyone regardless of age. In Spain the equivalent is “vosotros”. For example: Quiénes de ustedes prefieren chocolate para merendar? (Which of you prefer chocolate as your snack?). This pronoun is also used in some Spanish communities such as the Canary Islands.

Diving into the vocabulary

The vocabulary has its curiosities too. The different definitions of some words depending on where they are used can be strange as well. One of the most popular examples is coger. Be careful with this word if you are visiting Mexico. While in Spain it has a variety of meanings, such as “take”, “catch” and “hold”, there it is used as a synonym for having sexual relations.

The word chiva also stands out in this vocabulary. In Spanish it means a female goat. In Venezuela, on the other hand, it means second-hand clothing.

And what can we say about boludo? In Spain this word is seldom used but in Argentina and Uruguay it means “not the sharpest tool in the box” but be careful! If you travel to Mexico, boludo is used to refer to something that “has bumps”.

What’s more, in Spain, the word “perra” means a female dog or a child’s tantrum. In other countries like Ecuador it means the common hangover.

And if we talk about “foco”, in Spain this is a kind of lamp but in Colombia it is synonymous with drowsiness.

The essence of Spanish: the letter ñ

If there is one feature that distinguishes our language from the rest many people think that it is undoubtedly our endearing and beloved letter “eñe”, also known as the letter “ñ”. Well, it isn’t.  Those people are a little mistaken. Investigating a little about this characteristically Spanish letter we have found out that it is also part of other languages such as Guaraní, Quechua and Tagalog. Of course, the influence of the Spanish conquerors no doubt had something to do with this!

Leaving aside the issue of exclusiveness, the letter “ñ” clearly forms an intrinsic part not only of the name of the country Spain but of many words that, without it, would sound at the least a little strange and at most could cause confusion. For example, think about the chaos that could be caused by the word for nail “uña” suddenly becoming the same as the word for one “una”. “One nail” would become “una una” instead of “una uña”!

According to some scholars, the letter “ñ” has its roots back in medieval monasteries. As you know, one of the most important jobs monks had was copying books, an extremely boring and sometimes endless task. To save time, when they had to write the sequence of letters “nn” (for example, in “annus” or “Hispannia”) the busy monks would abbreviate and place a tiny letter “n” just above the first letter n. That miniature letter n eventually led to the famous feature that we all know and miss so much on computer keyboards in other countries.

Interesting words with the letter ñ

To end this article, we wanted to share some interesting words that are written with ñ.

Italy, Germany and Spain, can you tell the differences?