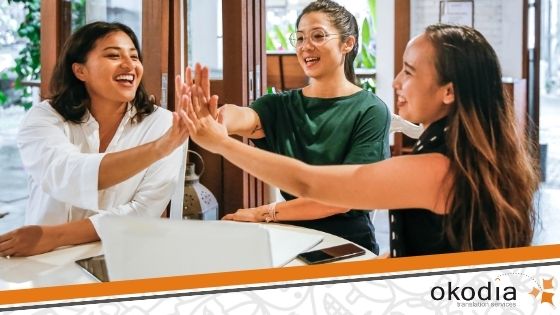 What role do women play in the world of professional translation?

We don’t have to look far to find evidence of this, since at Okodia Translation Services, 81.3% of the employees, including the professional translators and administrative staff, are women. This makes us wonder about the role played by women in the world of professional translation and how they have come into the sector throughout history.

The history of women in translation companies

Did you know that there have been women translators since the beginning of time? That’s true, even before translation companies existed. Perhaps that’s why this sector is predominantly female. But let us start at the beginning.

The history of women in professional translation dates back to the Middle Ages and the Renaissance, when religious texts needed to be translated. In both these periods, distinguished and influential women were allowed to perform this work. One example of this is Mary Herbert (1561-1621), Countess of Pembroke. The countess translated several works, including The Tragedy of Antony (1595), which portrays a positive image of Cleopatra. Another example is Margaret More Roper (1505-1544), daughter of Thomas More.

1. The female translator in Spain

In Spain, the professional translation sector has become more female in recent decades. Women have achieved great visibility in this sector over time. As evidence of this we need look no further than the Spanish Best Translation Awards which are already demonstrating the role of women in this field. Among the latest winners are the translator Helena Cortés (2021) for the Spanish translation of the German book “West–Eastern Diwan” by Johann Wolfgang von Goethe, Isabel García (2020) for her work with “Always the same snow and always the same uncle”, by the Romanian-German author Herta Müller, and Belén Santana (2019) for the translation of “Memoirs of a Polar Bear”, by Yoko Tawada.

2. The most outstanding female Italian and French translator

Giuseppa Eleonora Barbapiccola is the name that comes to mind when we talk about professional female translators of Italian and French. She is an Italian translator noted for translating the famous philosopher Descartes. This professional also used her work to encourage women to study science. This is what she wrote in a note in the translation of the works of Descartes.

She also translated “Principles of Philosophy”, so that Italians could learn about Cartesian philosophy and to encourage women to adopt entrepreneurial attitudes.

3. Who was the French translator, Charlotte Hughes?

In France, women have also played an important role in the world of languages. One of the most prominent in the history of translation is Charlotte Hughes. She was born in 1917 and died in 1999. During her professional life, the French translator Charlotte Hughes devoted herself exclusively to teaching and translating the works of African women. Her goal was, as she herself said, to promote the history of African literature. In fact, her work resulted in her being included in the Iowa Hall of Fame in 1997.

Another name that we hear frequently in the world of English translation is Aphra Behn. We know that she lived during the 1600s. Her life was not only associated with the world of translation, since she was also heavily involved in the arts as a playwright, writer and poet. She also worked as a secret agent in the service of the British government. She translated English and French and is known as the first female writer in English history, also considered the first to make a living from writing.

Among the works translated by Aphra Behn we can mention that of Bernard le Bovier de Fontenelle, where she shared the ideas of Copernicus and Descartes. In addition, it was a great inspiration for one of the world’s best-known writers, Virginia Woolf, who included it in her work “A Room of One’s Own”.

Finally, we cross the Atlantic to find out about one of the most outstanding professional translators in the history of Mexico, La Malinche. She actively cooperated with Spain and in Spain was known as an intercultural adviser of great diplomatic talent. However, La Malinche was much better known in Mexico for her role during the Spanish conquest, an operation in which she accompanied Hernán Cortés. She became the translator from Nahuatl to Mayan.

As you can see, history is full of great women translators. You should think about this because you will undoubtedly find a great woman translator behind that book you read recently or that translated website you visited recently.