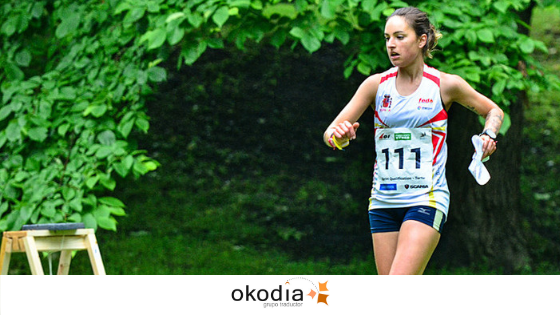 13 Feb Violeta Feliciano: “Mind and concentration play a very important role in orienteering and in languages”

Posted at 10:19h in Curiosities by Rocío González
0 Likes

No doubt many of you will have needed your sense of direction at some point, either to find an address or to make sure you don’t get lost in the countryside. This sense of direction, which we normally need in very specific circumstances or extreme situations, is part of the daily life of one of Okodia’s project managers, Violeta Feliciano. She is an elite orienteering athlete and has already won important national and international prizes. In our translation service we want to help her to continue achieving her goals, so we are going to sponsor her sporting activity. 🙂 Let me introduce her to you!

At first I treated it as a game. When I moved to higher categories such as Junior, Absolute and Elite, things got a little more serious and I decided that I wanted to train and compete so that I could qualify for the Spanish national team and take part in World Cups, European Cups, etc. The sport is just as competitive as any other.

The training is mainly physical, very similar to that for a cross-country or trail runner. However, we also do training for the technical map-reading part once a week to improve our orientation techniques and become faster in reading the map.

In truth, I am really grateful. I know that orienteering is not a very high-profile sport and the fact that Okodia wants to help me despite that shows that it is a company with strong moral ethics and exemplary values.

I think that the mental part has many similarities. When we learn or speak a foreign language, our brain has to think twice as much and create connections to find the most appropriate words or expressions within our own vocabulary. In orienteering we do not run thinking about words, but we are identifying symbols and colours when we read the map, in addition to thinking and choosing the best routes. We could say that we are also creating connections in our head so that we can progress along the route, and all of this while running quickly. The mental part and concentration play a very important role.

The season will start soon and I have the first national meeting in Ávila in mid-February. There are about 8 or 9 national meetings a year and some of them are qualifiers for the Spanish national team and to be able to take part in the Sprint Distance World Cup held in Denmark in July. So qualifying is one of my goals.