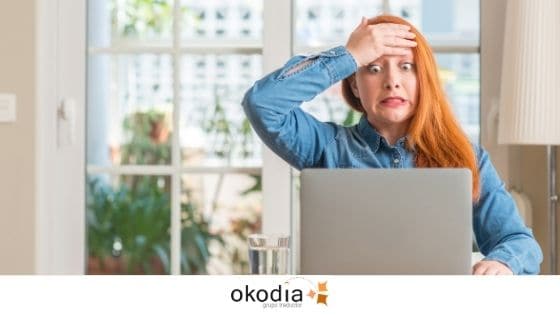 Translation errors that have helped us improve

“Everyone makes mistakes”. Have you ever heard this expression? It is used in all walks of life. Since it is used so much, we have borrowed it for this post on making mistakes with languages. Believe it or not, when you learn another language you are sure to make lots of mistakes, the type of silly mistake that years later you remember with a certain rueful smile while thinking: Goodness, did I really say that? We are happy to share some of stories that Okodia’s professional translators have told us. At times life throws us into the deep end and the important thing is to learn from that experience, to start swimming and become a good professional. Around here there are translation success stories that show that this can happen.

Imagine being a young Spanish university student who happens to attend a university where two languages are spoken, Spanish and Catalan. You are bound to make mistakes when trying to communicate in Catalan (especially if you don’t speak it very well). I am sure that you have also had the experience of trying to make a word from your own language sound a bit more like one in a foreign language in the hope that it will do the trick. You are not alone! We know of someone who, when chatting in Catalan with some friends, wanted to talk about a duck (“pato in Spanish”) and said the word “pats” rather than the actual Catalan word “ànec”. “And I was very pleased with myself after saying it!”

Let’s go back to the childhood of one of the professionals working at Okodia. She was living in Catalonia but had to go on a trip to Madrid with her Mum who needed to go there for work reasons. For entertainment, she was given a piece of paper and some colouring pencils. However, before she could finish her artwork the pencils were all blunt, so she had to ask for a pencil sharpener. Unfortunately, she used the Catalan word for pencil sharpener, which is “maquineta” and in Spanish this means “small machine”. So, the Spanish woman was of course confused. “What do you want a small machine for?” she asked. The more the girl repeated herself, the less the woman understood. She became so frustrated at not being able to remember the right word in Spanish, which is “sacapuntas” that she had to ask her mum for help.

A teenager’s first trip abroad is exciting and often results in lots of anecdotes involving the language. In this case, it was a study trip to Dublin and a visit to a large country house where there were stables with horses. The mistake came when putting together a simple phrase in English to ask a local if the horses were hers. The result? They ended up asking “Are you a horse?”. When they saw the woman’s concerned face they quickly added “Oh! You are a horse!”.

A matter of “eses” and paying attention.

The “eses” in English are always complicated for the Spanish, and especially for those who come from the south and tend to treat them as being silent letters. However, it is good to pay a little attention when it comes to talking about the content/contents of a website or container. For example, in English “content” is what you can find on a website, while “contents” refers to what is inside a container or the subject of a book or letter. And speaking of paying attention, rushing a translation can be dangerous.

One of the last orders we received at Okodia Translation Services asked for the translation of a document into French. However, something must have happened because we thought that they wanted it in English, only realising our mistake when we had almost finished the job. Despite everything, our super translators managed to get the order completed on time. You always learn from your mistakes.