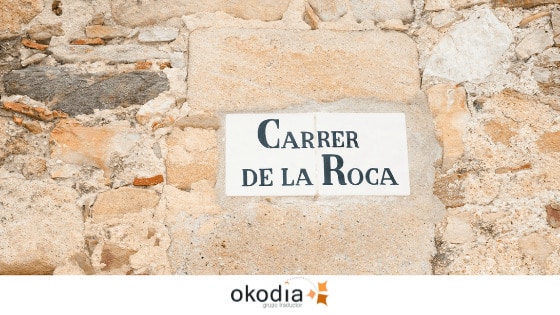 The most amusing Spanish street names

Madrid and its countless curious names

It turns out that in Madrid there really are streets with names that are just as amusing. Calle de la Lechuga (Lettuce Street), de la Pasa (Raisin Street), de la Fantasía (Fantasy Street), de La Cenicienta (Cinderella Street), Salsipuedes (Salt if you can Street), ACDC Street… The collection is endless, and Madrid is not alone. All cities, towns and villages around the world have curious and funny street names and translating them often adds to the amusement.

The most amusing street names

The story (real or fictionalised) is worth sharing. It seems that a beggar called at a wealthy house on that street asking for help. An old lady opened the door and, seeing how hungry the poor man was, she gave him a small chicken (polla in Spanish).

The beggar, grateful for her generosity, returned to the house the next day and left two chicks (re-polla) at the doors of the house and, to keep them company, a wooden crucifix. And so, a new Christ was “born”: that of the Cabbage (repolla).

Calle de Tintín y Milú (Tintin and Snowy Street). Madrid.
Ideal for fans of a good comic. This small Madrid street is in the town of Barajas (yes, there is a town in Barajas), in the Alameda de Osuna neighbourhood. The story behind its name is not as beautiful as the previous example. It was a lucky proposal from a councillor who was a fan of the incredible Hergé comic strips. Finally, a politician with a brilliant idea;)

Calle Tantarantana (Tantarantana Street). Barcelona
Located in the famous neighbourhood of La Ribera, it seems that Tantarantana Street got its curious name from one of its illustrious sons, an 18th century town crier. This man, whose name we do not know, was famous for the rhythm of his “rat-a-tat-tat” on the drum and trumpet when he called for attention before reading the official news. In Spanish that “rat-a-tat-tat” noise is called “tantarán”. I don’t know if one of the neighbouring streets was called Calle Tapones (Ear Plug Street), but it might not have been a bad idea!

Avenida Súper Mario Bros (Super Mario Bros Avenue) Saragossa.
The Aragonese capital is “guilty” of baptising one of its roads with the name of the most famous virtual plumber in the world: Super Mario. The idea for this curious name arose from an ideas contest. In 2008, the future residents of the housing complex under construction, known as “Arcosur”, decided to choose the names of their streets in a creative way and, it would seem, many of the neighbours were fond of video games. The ceremony to open Super Mario Bros Avenue was worth seeing: hundreds of neighbours in overalls and false moustaches cheering a statue of their hero in Aragonese dress. As you can see, reality really is stranger than fiction.

And you? Do you know of any amusing street names we have not mentioned? There are hundreds:)
Why not tell us about them!