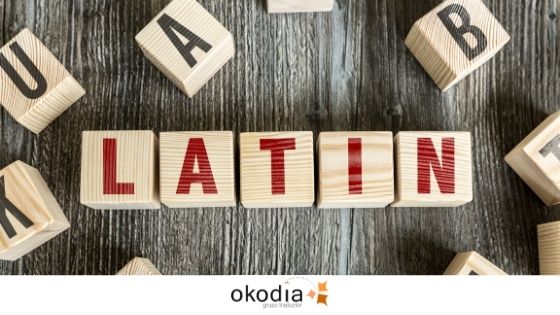 We all know that the Spanish language comes from Latin. We can see this in words such as calida that has become caldo, tabula that is now tabla and oculus that has changed to ojo. However, where did Latin come from? From what period of history?

Today we are going to have a look at the evolution of Latin, but don’t worry, it isn’t going to be a boring lesson!

Latin is an Indo-European language, which means that it shares some syntactic, graphological and lexical rules with other languages. According to linguists, Latin was first seen between 4000 and 5000 years ago (give or take a month or two). It was spoken by the inhabitants of the territories of Central Asia and South-eastern Europe.

This first language spread to various parts of Europe thanks to the famous Etruscans. This travelling and invading people, after many adventures, comings and goings, decided to occupy a small, beautiful area of Italy, called Lazio. So now we understand the origin of the name of the language, since Lazio became Latin.

All languages of a certain age have evolved with use. We just have to look at how Spanish, English, French and Russian have changed over the last 100 years.

Moreover, the same language can be spoken in different ways depending on where the speaker lives. This happens nowadays too. We can think, for example, about the Spanish spoken in Mexico, the Dominican Republic or Colombia. A Spaniard can understand the language used perfectly, but it is not spoken in exactly the same way as it is in Cuenca, Seville and Leon. For example, do you know what the Spanish verb “coger” means in Mexico?

Thirdly, and just as importantly, languages always have a formal “cultured” version and an informal version, known as “vulgar” or “colloquial“. The normal thing to do when using a language on a daily basis is to shorten or change it. In other words, to adapt it to the needs, skills and limitations of the speaker.  This tendency is called the “economy of language”.

More formal cultured use is reserved for official documents and protocols. Vulgar language is found in places such as the markets, squares and parks.

This is exactly what happened with Latin. It evolved over the years and took on specific forms defined by the geographical place where it was used. It was also adapted and moulded by the speakers themselves depending on what it was being used for, whether colloquial or formal purposes.

From Classical to Vulgar Latin

From its origin until the second century BC, the Latin that was spoken was known by the name of archaic (old). A small piece of jewellery, the so-called Praeneste fibula (the “brooch of Palestrina”)” is inscribed with a text in this early Latin and the curious thing is that it was read from right to left.

Over the following four centuries, from the second century BC to the second century AD, archaic Latin evolved and gave way to classical Latin, a language that some people have learned in school. The texts of Cicero and Julius Caesar and the poems of Ovid and Virgil are excellent examples of the vocabulary and grammar used in this more evolved Latin.

However, as always happens with languages, the upper classes spoke one language and the ordinary people spoke another. This gave rise to the so-called Vulgar Latin, a language whose phonetics, syntax, grammar and vocabulary were quite different from those of classical Latin.

Butchers, fishmongers, housewives, craftsmen and soldiers spoke Vulgar Latin and it was precisely the latter, the soldiers, who spread this language throughout the territories occupied by the Roman army.

From Vulgar to Medieval Latin

As you may be aware, in the 4th century we witnessed the fall of the all-powerful Roman Empire.

Vulgar Latin no longer had emissaries to keep its grammatical rules and vocabulary intact and, logically, it was the new speakers of Latin who began to mould it to their daily needs. This is where we see the influence of the religious development that would most influence European history, namely Christianity. The Christians soon modified Latin by introducing works of Greek origin, Latinising certain terms and even inventing new words.

From Medieval Latin to the new languages

According to linguists, the vulgar Latin so widespread in the different territories invaded by Rome was blended with the native language of each country or region. The result was the languages which have their roots in Latin and are still in use today: Spanish, French, Italian, Portuguese, Romanian, etc.

In the end it was the people who made this particular decision about what language millions of people would use to communicate in the future. That seems right to us!

Spanish is a dialect derived from Vulgar Latin, as are the other romance languages such as French, Catalan, Italian, Aragonese, Romanian, Asturian, Corsican and Galician, among others. Its medieval origin can be found in what in those days was called Castile, a region that is not the same as the current region of Castile-Leon, instead being a northern region of the Iberian Peninsula that roughly covered part of Cantabria, the north of Castile and La Rioja.

In medieval times, there was no political union called Spain and there were various romance dialects on the Iberian Peninsula, not only the ones we know today but many others, such as the now extinct Mozarabic dialects. With the political unification of the Iberian Peninsula in the times of the Catholic Monarchs and the colonisation of South America, the idea of Spain began to make sense and the Spanish language spread overseas.

The language spoken in Spain today, Spanish, is not the same as that medieval dialect Castilian. While it does come from it, it has seen additions from many other linguistic substrata and has received a multitude of influences since then. However, its original name has been maintained for historical reasons, just as other archaisms persist in our language, whose use is entirely correct. Let’s now take a look at what solutions other European languages adopted when developing their own language.

In France, where for a long time the d’oc languages fought for prominence with the d’oïl languages, they decided to use the name French  for the language which, although it came from one of the northern dialects, also claimed to be the language of all French people, as was reflected in its spelling. In Germany, a Frankish dialect originating from the central dialects is now what we know as German and although its standard written use is also known as Hochdeutsch, this name refers precisely to that, to a specific use, so there is no doubt that the language is known as German. Nor is the modern language that today is spoken across Italy, beyond its native region, known as Tuscan, instead being called Italian.

From this we can deduce that, inevitably, all the modern languages come from the same dialect which in turn came from the same region. The people living there crossed its borders a long time ago, with the result that today it has been taken on by a larger number of speakers.  With each country doing its own thing with that language.

Legal Latin terms that you probably use in the wrong way