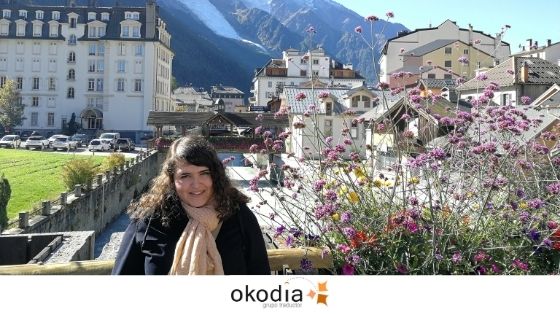 We interview Ana María, one of the project managers at Okodia Translation Services. She took a degree in English Studies at the University of Oviedo and a master’s degree in New Technologies Applied to Translation at ISTRAD. She started working at Okodia three years ago. What began as an internship has become a fully professional experience. Read on and find out more about her!

• Why are you interested in the world of translation?
Well, the little seed that began all this was something as simple as the song “Yellow Submarine”. In the early years of English teaching at school they played that song so that we could sing it and I loved the feeling of being able to sing it, understand a single verse by myself and be able to translate it for my parents.

• What do you like most about your daily work here?
Contact with different translators around the world. It makes you to realise how different our lives can be but, at the same time, how hugely interconnected the world is, and even more so nowadays.

• What is the strangest thing that has happened to you in the time you have been working at Okodia?
A curious thing: a Dutch translator once told us that she had bought a house to restore in a village in Asturias, which surprised me a lot because of how unexpected that was. It’s one of those little things that makes you realise how small the world is!

• How would you describe the world of translation?
The word that best defines it is “undervalued”. People think that it just involves being about to speak a language, but they don’t understand all the research, imagination and constant decision-making that goes into it, depending on the context.

• Some people say that the world of translation is very complicated. After all your years working at Okodia, do you think that’s right?
Undoubtedly, all my time here has only reinforced my view that this is true. There are so many things that we take for granted and, when it comes to translating, we have to deal not only with linguistic differences but also cultural ones. In the end, translation can be very subjective and even if you do your best to meet the customer’s expectations in every job you do, you won’t always manage it 100%.

• What advice would you give companies thinking about translating their content?
That they should do it. There is a world of difference between arriving at a restaurant to be offered “nicewithtomato” and actually knowing (clearly) what you are going to eat. The first impression of a company and the confidence it gives people is key, and translation plays an essential role in this. This is all without even mentioning the fact that translation allows you to reach a lot more people!

• Tell me about a situation in which you had to make a decision and take a risk without knowing the scope of the possible repercussions.
Well, it is possibly not the most relevant example, but I started studying a science degree that was not what I expected at first and look where I ended up :).

• Is there a language that particularly catches your attention? Why?
Once I was a little older, Japanese was the first language to catch my attention and it really made me think about how fascinating this world can be. During adolescence, the Internet allowed me to watch anime, read manga and play video games, and it was inevitable that I would be struck by the obviously “exotic” appearance of the language and certain culture shocks that it brought with it.

• How and where do you see yourself professionally in 10 years’ time?
I hope I can continue working in the area I enjoy and if that can be at Okodia, then all the better!