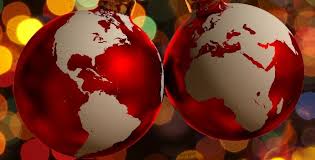 Krampus, the tió and our translation agency wish you a Merry Christmas!

The twinkling street lights and the gradual appearance of different traditions in our homes are tell-tale signs that Christmas celebrations are upon us. The traditions of this season, just like languages, break boundaries every time and translation is the passport to new destinations. So it really wouldn’t surprise us if Father Christmas asked for the help of a translation agency during this time of year.

To start with, even Father Christmas himself has different names depending on the country. In Argentina, Bolivia or the United States he is known as Santa Claus, in England as Father Christmas and in Chile as the Viejito Pascuero. In Finland, interestingly, his name is Joulupukki, which literally means Christmas Goat, in Denmark they call him Julemanden and in the Netherlands, Kerstman. In the two latter cases, the translation means “Christmas Man”. In Austria we also have Krampus, Father Christmas’s assistant who pays a visit to all of the naughty children. Nevertheless, we mustn’t forget that here in Spain it’s the three Kings who have the job of bringing the children’s gifts.

Another of the more internationally well-known traditions are Christmas carols. Silent Night, for example, can be heard in many countries around the world at this time of year. German families will recite Stille Nacht, hellige Nacht – the language it was originally composed in–, in Spain we will sing Noche de paz whereas in France you´ll hear Douce nuit. These are just some examples, because this Christmas song has been translated into more than 300 languages. We now know them well, but these words must have surely originated in some translation agency or other. As have the newer versions that have appeared since.

The arrival of Father Christmas and carols are a common denominator in many parts of the world, but there are customs that are unique to certain countries and areas of the planet that have not –yet– spread to others. Closer to home, in Catalonia we have the tió –que no cagatió– (a Yule Log decorated and personified as a man) who, having been beaten with a stick by children, goes on to defecate presents for them. Though it does sound that news of his existence has travelled across frontiers, as we can see in this article, in which actress Kate McKinnon tells the audience of an NBC programme about this curious tradition. The translation of its name, Catalan Poop Log, a literal version of the misleading catagió– leave no doubt, but if she had consulted a professional translation agency the result would certainly have been different.

The gifts –products of the consumer-orientated side of our society– are among the other star traditions of Christmas. If you still haven’t written your letter to Father Christmas or the three Kings, we can give you some inspiration: a translation of your favourite author´s novel into your language, a good translation of your webpage or e-commerce or, or if you have one, a translation for your blog.

Alternatively, if you’re thinking of giving us a present or to a translator that you know, we leave you with some ideas here. Merry Christmas!